Love, parties, having babies - what a carry on amid the ruins! 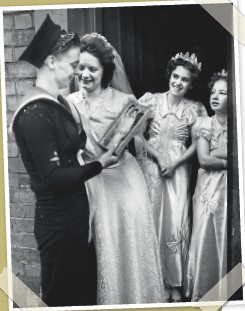 The Luftwaffe could do their worst but life on the Home Front carried on regardless. As these next images reveal, people still prayed in a bombed-out church, birthday parties were held in the street if the house was no longer standing and, even amid the blazing aftermath of an air raid, everything still stopped for tea. If war brought out the stoical side of this country, it certainly did not diminish people’s ability to love, laugh and celebrate. When the future is fragile, you live in the moment, grabbing every chance for happiness. Despite the dangers of going out, theatres and cinemas were packed as everyone sought out a distraction from everyday reality. When it came to love, people didn’t hang around. Dance floors were filled with couples clinging to one another in the knowledge that this could be their last dance. With so many men going away to fight, wedding dates were brought forward and ceremonies arranged quickly. A wedding dress was borrowed or made, gardens raided for flowers, rations donated from friends and family to make a wedding cake. Often the newlyweds had barely exchanged their vows when the groom had to leave, only too aware that he may not return. Love letters, filled with details of daily routine and romantic longing, were a lifeline to the many separated couples. The arrival of the American soldiers in 1942 caused many a girl’s heart to flutter. With their generous supplies of candy, Coca-Cola, cigarettes, stockings, and their easy-going confidence, the GIs were a very attractive proposition to a war-weary nation. A jitterbug with a handsome stranger could have life-changing consequences. By the end of the war around 70,000 British women became GI brides and left Blighty for a new life across the Atlantic. With all this living in the moment, midwives were kept very busy delivering babies born in and out of wedlock. Many women went through labour without pain relief due to war shortages and a fair few babies were born in air-raid shelters. As the war went on, the chance for traditional celebrations were limited. There were no fireworks on Guy Fawkes’ night, no Easter eggs and no summer holidays. But Christmas was never cancelled. Gifts were made or recycled, the turkey replaced with chicken and if you were lucky enough to have a tree, it may be decorated with coloured buttons or earrings. Even if it became increasingly frugal with every passing year, people always did their best to make it a special time. But, like every family event during the war, it was also a time when you thought about those who weren’t there and hoped that next year might be different.